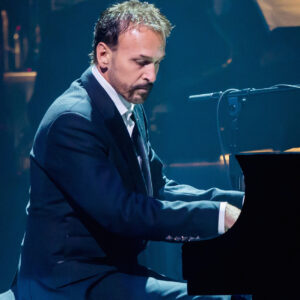 As a renowned and versatile pianist whose styles encompass a wide range of musical genres, Philip Fortenberry is an artist with an equally expansive career.
A native of Columbia, MS, Philip began playing piano at age four, became the accompanist for his church at age seven and performed his first solo concert at age twelve while continuing his work as a church pianist. After completing his undergraduate degree in 1980 at William Carey University in Hattiesburg, MS, he left the south and moved to New York City. Philip continued his studies there and holds a Master of Music Degree in classical piano performance from New Jersey City University, was an adjunct faculty member in the Steinhardt School of Education at New York University, and continued his private piano studies at The Juilliard School.
Early in his career, Philip became the musical director and on-stage pianist for the hit off- Broadway revue, FORBIDDEN BROADWAY. He was also the musical supervisor for the West End version of the show in London. Philip played for 10 Broadway shows and eight national tours including CATS, JESUS CHRIST SUPERSTAR, SATURDAY NIGHT FEVER, RAGTIME, SEUSSICAL THE MUSICAL, SIDESHOW, and THE LION KING. He was the pianist for the Roundabout Theatre’s Broadway revue of the music of Burt Bacharach and Hal David, THE LOOK OF LOVE, and was the associate music director for Barry Manilow and Bruce Sussman’s pre-Broadway workshop production of HARMONY. He toured the U.S. and Canada in concert performances of THE MUSIC OF ANDREW LLOYD WEBBER starring Michael Crawford.
In 2002, by joint commission from the Eudora Welty and William Faulkner Societies, Philip, along with actress Brenda Currin and director David Kaplan, created and performed a theatrical fantasia entitled JUNE RECITAL, which was based on the works of acclaimed Mississippi author, Eudora Welty, and which incorporated Beethoven’s “Emperor” Piano Concerto.
Philip made his Carnegie Hall debut in 1986 as the pianist/conductor for Eartha Kitt and later returned to Carnegie Hall in concert with The Three Irish Tenors. He has also performed as pianist for singer Charlotte Church in Avery Fisher Hall at Lincoln Center. In 1990, Philip accompanied internationally renowned mezzo-soprano, Frederica Von Stade, at the Oregon Bach Festival. They were invited to perform at the White House for the Summit Conference between Mikhail Gorbachev and President George Bush. Later that year, by invitation of President Bush, ‘Flicka’ and Philip performed at the Economic Summit of Industrialized Nations. Philip also performed at the 40th Anniversary Celebration of the United Nations, and in 1996 he was privileged to accompany singer Laurie Beechman at the 70th birthday gala for Lady Margaret Thatcher in Washington, D.C.
After 25 years of living in NYC, Philip became a resident of Las Vegas in 2004. He was the associate conductor for the North American premiere of the rock music extravaganza, WE WILL ROCK YOU, at the Paris. Philip also played and conducted for HAIRSPRAY at the Luxor and MAMMA MIA! at Mandalay Bay. For 8 1⁄2 years he was the associate conductor for the Las Vegas production of JERSEY BOYS. In 2008 he was invited to be an artist-in-residence at the famed Liberace Museum where he performed 300 concerts of his solo show, LIBERACE AND ME. In 2013, Philip was the piano/body double for Michael Douglas’ award-winning performance as Liberace in the HBO biopic, BEHIND THE CANDELABRA.
As a partner in two entertainment companies based in Las Vegas, NV, Philip was the co-producer and pianist of the critically-acclaimed revue, THE COCKTAIL CABARET, that debuted at the iconic Cleopatra’s Barge at Caesars Palace on the Las Vegas Strip.
In 2014 Philip became the first recipient of the “Ghost Light Award” as Best Musician on Broadway as the pianist and associate conductor for the Broadway production of ROCKY. He was honored again that same year with the “Encore Award for Musical Excellence” presented by the Nevada School of the Arts. In 2004, Philip received the Distinguished Service Award from his alma mater, William Carey University, in Hattiesburg, MS. In 2019 William Carey conferred upon him the degree, Doctor of Music, honoris causa.
Philip is the music coordinator for the Broadway Series at The Smith Center for the Performing Arts and is the organist and instrumental music director for Community Lutheran Church in Las Vegas. He serves on the board of The Composers Showcase of Las Vegas, a NV non-profit that provides composers the opportunity monthly to present and perform original music at Myron’s Cabaret Jazz at The Smith Center.
As a concert artist, Philip has toured the U.S. with solo performances where he shares his music and life stories from personal experiences as a professional musician. In 2018, he completed a three-week tour of China performing his SALUTE TO BROADWAY concert for thousands of Chinese citizens in 14 cities. Philip is a recording artist for Watchfire Music and has produced eight solo collections. He is represented internationally by his management company, KMP Artists.