Nicholas is perhaps best known for his television role, Nick Chavez, on ABC’s “One Life to Live” for which he received the GLAAD Media Award, the 2009 Visibility Award, and, along with his co-stars, “Men of the Year.” Nicholas made his Broadway debut in Disney’s production of TARZAN. Prior to that, Nicholas originated the role of “Aaron”, starring opposite Val Kilmer’s “Moses” in the U.S Premiere of THE TEN COMMANDMENTS at the Kodak Theatre in Los Angeles. He has appeared at Carnegie Hall in GUYS AND DOLLS starring Nathan Lane, Megan Mullaly and Len Cariou, and premiered Andrew Lippa’s I AM HARVEY MILK/I AM ANNE HUTCHINSON with Kristen Chenowith at Lincoln Center and Strathmore. Nicholas has traveled the world on tours of JESUS CHRIST SUPERSTAR (Jesus), EVITA (Che), and HAIR (Claude). Off-Broadway he starred in THE TOXIC AVENGER: THE MUSICAL, ALMOST HEAVEN: SONGS OF JOHN DENVER, DEATH FOR FIVE VOICES, COLETTE COLLAGE, and BAJOUR. This fall he’ll play Billy in CAROUSEL at Arena Stage in Washington, DC, where he recently he starred opposite Kathleen Turner in MOTHER COURAGE AND HER CHILDREN, played Freddy in MY FAIR LADY, Fabrizio in LIGHT IN THE PIAZZA, and was also seen as Curly in OKLAHOMA! for which he received a 2011 Helen Hayes Award for “Best Actor in a Musical” and was named “Top 10 Performers of 2010” by Hilton Als of The New Yorker.

On the big screen, Rodriguez was seen in SEX AND THE CITY 2. He is also featured on the film’s soundtrack. Nicholas’ additional regional credits include: TARZAN (Tarzan), BEAUTY AND THE BEAST (Beast), CAMELOT (Lancelot), LES MISERABLES (Javert), MOTHERS AND SONS (Will Ogden), DAMN YANKEES (Joe Hardy), SOUTH PACIFIC (Joe Cable), THE BUDDY HOLLY STORY (Richie Valens), THE WIZARD OF OZ (Tin Man), THE KING & I as “Lun Tha” with Lou Diamond Phillips, NEFERTITI (Akhenaten), CINDERELLA (Prince Charming), LAST 5 YEARS, CANDIDE with Harrisburg Opera, LOVE, VALOUR, COMPASSION! (Ramon), and MASTER CLASS (Tony).
Venturing into the world of the web, Nicholas joined the ensemble cast of THEN WE GOT HELP for which he received a Best Actor Nomination for the American Soap World Awards. He has performed at Radio City Music Hall, 54 Below, Feinstein’s, Birdland, and the Metropolitan Room in New York City. A native Texan, he holds a Bachelor of Music and a Master of Music Degree in Vocal Performance from the University of Texas at Austin. www.thenickrod.com 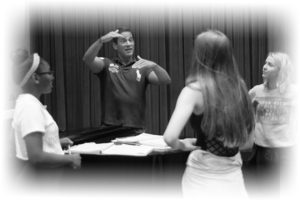